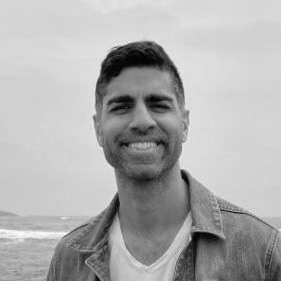 "In my walks, every man I meet is my superior in some way, and in that I learn from him."

Patent litigation was never part of the plan. Khurram entered law school with his sights  on a career in corporate law. The timing was challenging though: 2010 produced the greatest wave of law students ever, all in the midst of the biggest recession since WWII. Faced with a challenging market, he made a  plan to network his way into BigLaw, and to use his experience as a lab researcher to pivot to patent litigation. To make that happen, Khurram met about 200 attorneys for coffee or lunch over the course of his last year in law school. He got his job at Polsinelli from #197.

Raised in suburban New Jersey, Khurram had a typical academically-focused upbringing. When the reality of paying his own way through college hit, Khurram was motivated to get out in the real world, and graduated at 20. That took him on a Kerouac-style quest for true experiences -- working as a dishwasher, as a lab researcher, living on a commune in Oregon and canvassing for DNC donations (he says that purple doors are the most fruitful). Eventually he ended up in law school in the way that so many of us do - at the urging of a concerned girlfriend.

After practicing at Polsinelli in Chicago, he moved to Boston to practice at Goodwin to grow his Hatch-Waxman practice and move into biosimilars litigation. But when that work became scarce, Khurram needed to decide if he should pivot or find a new role. He chose to explore.

All of his lessons in resiliency made Khurram a natural confidant to friends facing a challenging market early in the pandemic. He started a newsletter, collecting roles from South Asian lawyers who were hiring and stories from lawyers with unconventional paths. That newsletter grew into Pani Cooler (pani = water in Sanskrit), a newsletter for South Asian lawyers with thousands of members. Building relationships and community is what led Khurram to recruiting.

Since leaving law practice, Khurram has self-published The Indie Guide to Building Your Legal Network, which provides the playbook he used to break into BigLaw from a non-target school through networking.  Khurram is also the founder of Pani Cooler, a newsletter for South Asian lawyers to get them hired and inspired.

Khurram is currently expecting his first child with his wife Emma, with whom he runs Pani Cooler.

“Archimedes’ Eureka moment. When I read about it as a child, it made intellectual achievement seem emotional and special.”

What movie was secretly about you?:

“You’re really asking a lawyer to weigh in?”